New York City, monsters’ favorite spot to play dominoes and hold their regular ‘Fight Club’ events. Tonight, the giant monsters appear to be disturbed as there is a new strange beast in town. A kaiju that does not seem to have eyes, yet can sense every tiny change in the living world around it! Can the blind creature become the King Of New York?

In today’s episode of ‘Board Games You Can Play Blind’ we will talk about a game that takes the classic Yahtzee dice rolling mechanic, adds some monsters and power-ups, and creates an exciting battleground that can be enjoyed by children and adults!

The first thing we’ll do is go through the game overview and briefly talk about the game rules. We will then dedicate a section to the visual accessibility of King Of New York and analyze the difficulties blind players may experience. 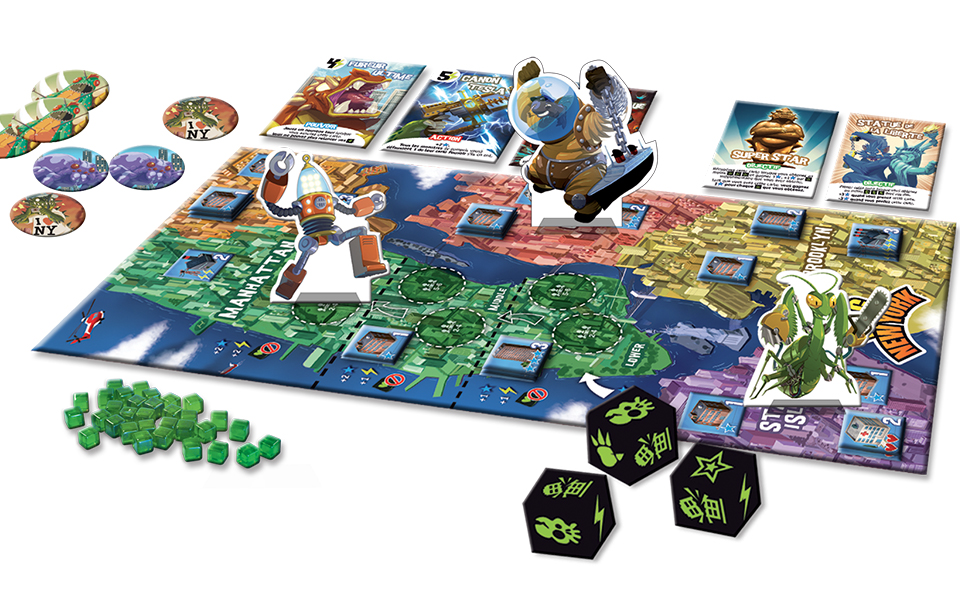 Image showing all the game components

King Of New York is a competitive dice game where players take the role of giant monsters that battle with each other in the city of New York. The winner of the game is the player that either collects 20 Victory Points or is the last monster standing.

At the beginning of the game, each player chooses a borough to start in. They can choose between Brooklyn, Queens, The Bronx, and Staten Island. Manhattan is a special borough that the starting player will move to at the end of their first turn. After choosing their starting locations, buildings that give different benefits when destroyed are randomly put to all the boroughs. The starting player is determined by each of them rolling all the dice once and counting the ‘Claws’ that they rolled. The player that rolls the highest number of claws is the first to start.

The main driver of the player actions are the dice. On a player’s turn, six dice can be rolled up to three times (just like Yahtzee if you are familiar with the classic game). Depending on what the player has rolled, they can attack other monsters, heal themselves, get damaged by the military units, collect energy cubes which represent money to buy power-ups, destroy a building or a military unit, or simply collect victory points. After the first roll, the player can choose to keep some of the dice they like and continue rolling the rest. When they are finished rolling, they resolve the actions on their dice. 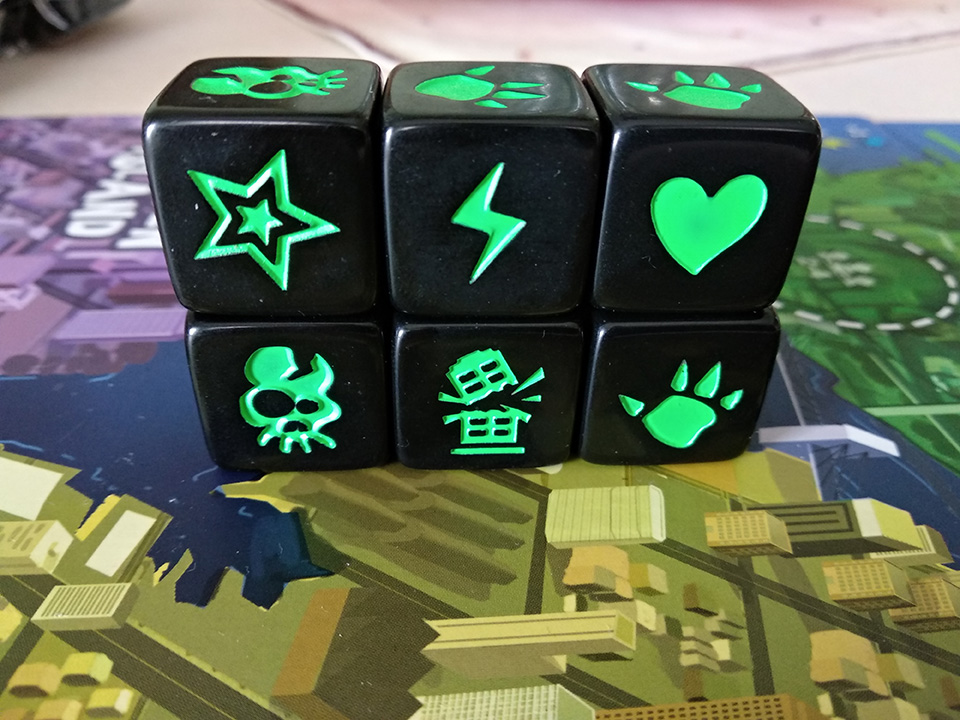 Image showing the actions on the dice

Before the player turn is complete, after resolving the actions on the dice, the movement phase begins. In this phase, if Manhattan has a free slot, the player moves to Manhattan. Otherwise, the player can choose to move to another borough that does not have 2 other monsters. They can do this when they are trying to avoid the military units in the current borough that they are in, to get to a building they want to destroy or simply block another player from fleeing their location that is overrun by the military units.

After the movement phase, the player has one final thing to do before completing their turn: purchasing power-ups. There is a deck of power-up cards that represents the marketplace. The marketplace has 3 different power-ups at any given time. When a player buys a card, a new one is drawn and displayed on the marketplace. The player can also choose to spend 2 energy cubes to discard all 3 cards and replace them with 3 new cards from the top of the deck. This usually happens when a player tries to prevent other players with more money from buying a strong power-up. With the conclusion of this phase, the player turn ends and the next player starts rolling the dice.

King Of New York is the younger brother of King Of Tokyo, however, it is more mature and has more depth. The added depth results in increased complexity. If you want a simpler variant of this game, one that removes military units, buildings, moving from borough to borough, I recommend checking out King of Tokyo. Children younger than 10 might enjoy the first game (Tokyo) more than this one due to its simplicity. If you want a little more strategy and choices during your turns, you will enjoy King Of New York.

Now that we’ve covered how the game plays, let’s see how visually accessible it is.

I will divide this section into two subsections: Gameplay and Game Component Accessibility.

The first key point we should mention is the fact that there is no hidden information in King Of New York. Dice rolls, power-up cards, energy cube amounts, and monster health and Victory Point status are all publicly available. This means that blind or visually impaired players do not need modified game components to be able to play the game.

The separation of a player’s turn into multiple phases also helps separate the information about the state of the game to a blind player. What I mean by this is, the blind player does not need to know every single detail on the board at all times to be able to keep up with others. For instance, in the dice rolling phase, here’s a short list of things I need to know to decide how I want to play:

Then depending on my first roll, I narrow down the list of options I have and I may need to ask another player what their health is or the number of military units located in their area. Similarly, other phases may require you to know some other information, for instance in the movement phase you could ask a sighted player to tell you which borough has a hospital, or which one has the least amount of military units to avoid being damaged by them on other players’ turns.

When a blind player plays a board game, depending on the amount of information the blind player needs to know, games can be slowed down and last longer. However, I did not experience this issue in King Of New York. In the first couple of games, until the blind player gets the hang of the rules, turns may last longer, but that also applies to new sighted players, too. Therefore, I do not think there should be any worries about game time being extended when there is a blind or visually impaired player around the table.

The first thing I want to talk about in this section, which also happen to be my favorite components, are the dice. The dice in King Of New York are very large and they are indented. You can see the size difference between a Camel Up die, a generic 16mm die, and King Of New York die. 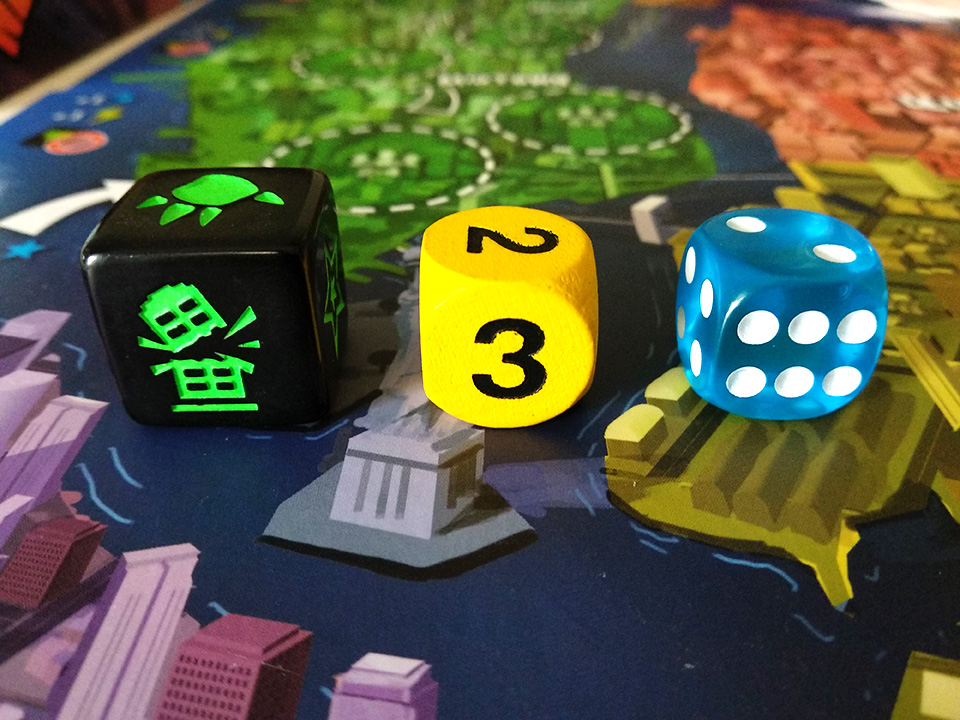 The symbols on the dice are well contrasted and quite large. For visually impaired people that still have some sight left, this is a great thing. Blind players may also figure out what they have rolled by touch, but usually another player just telling them is much faster.

The monsters are also quite large, and if you have some sight left in your eyes, you may be able to distinguish one from another to see where they are currently located on the map. The monster boards where you track your health and Victory Points however can be a little more problematic. Even though I have some sight left, I require another player to move the circular dials for me. If you don’t trust your fellow player, it is a good idea to memorize the current status of your monster!

Image showing monsters on their stands

Next, the double sided tiles the represent a building on one side and a military unit on the other are small which I can’t tell what they say unless there is good directional light. A blind player can be useful when shuffling them at the beginning of the game. What we do is, I shuffle the tiles, grab 3 at random and ask another player to place them in a borough of my choice. Then I keep drawing stacks of 3 tiles which another player places in a clockwise order in all boroughs. The sighted player ensures that the buildings face up before placing the stacks. 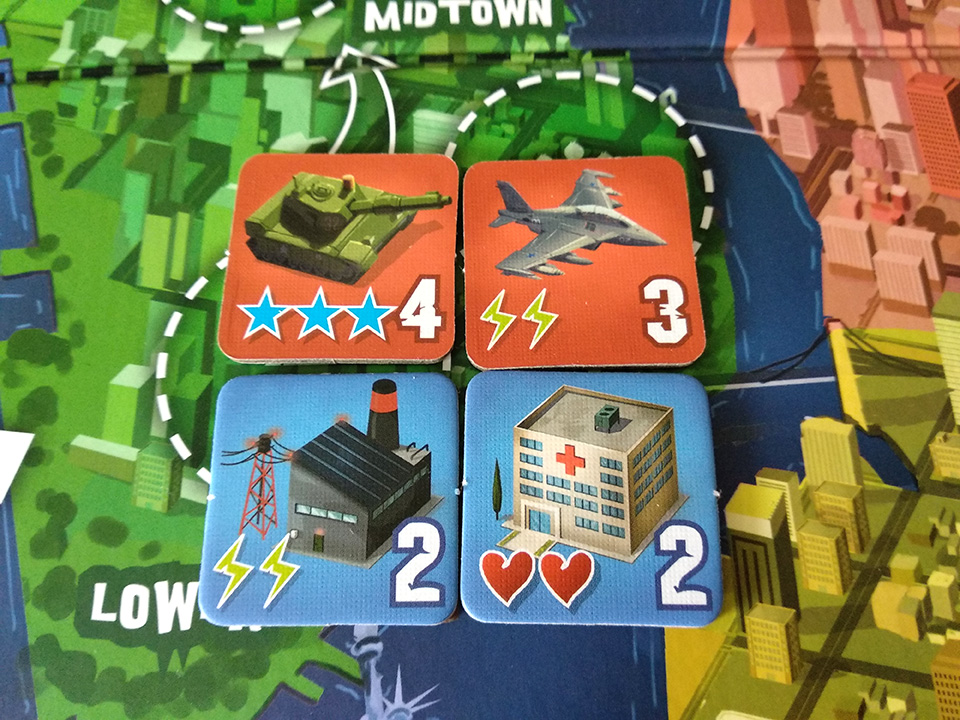 The energy cubes which represent money are small, but since they are of a single type you can easily count them by touch. The power-up cards are of a decent size and the text has fair contrast but in the games I’ve played it still is faster for a sighted player who is sitting close to the cards to read them out loud for everyone around the table. There also are a few tokens that can be used in the game with a certain power-up card. These are simply used as counters, so they do not present an accessibility problem. 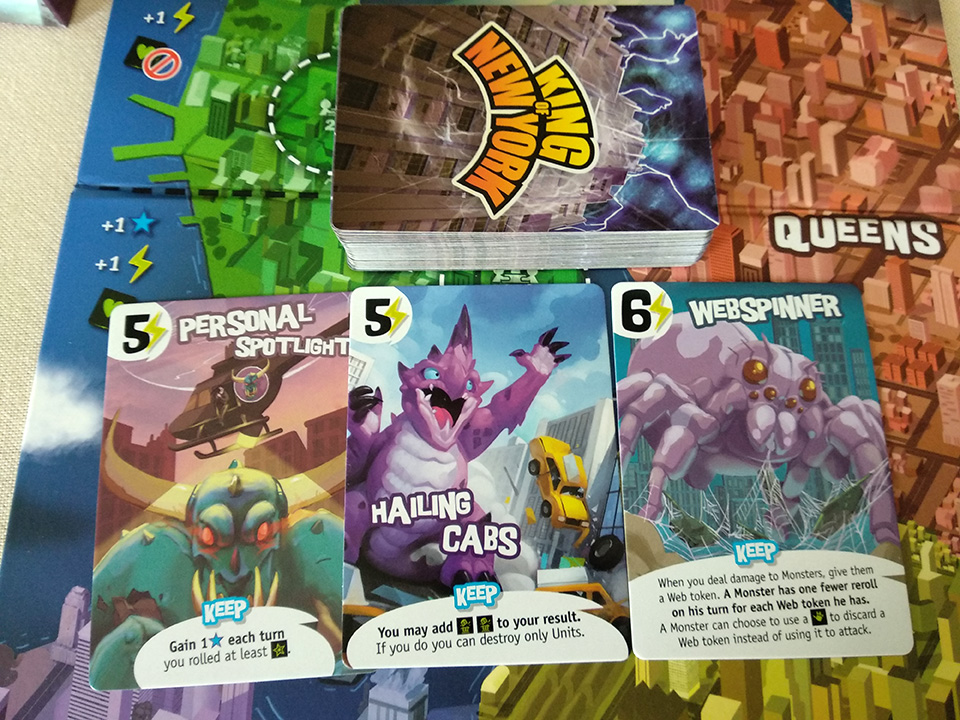 If you happen to enjoy dice chucking like me, you will have a lot of fun with this game. Ganging up with your opponents to destroy a monster who is leading or getting pounded by the military due to horrible rolls can produce a lot of laughs around the table. If you like what you see, but it sounds too complicated for you, I suggest checking out King Of Tokyo. I will link to the Meeple Like Us accessibility teardown of that game in the Resources section below. Most, if not all, of the observations in that article apply to this game as well.

Overall, King Of New York gets a high rating for visual accessibility from me. Sightless players shouldn’t need more than a couple games to feel comfortable with the rules which is the same for sighted players. I should mention that the expansion to this game introduces ‘Evolution’ cards, which are supposed to be hidden from your opponents, so you should know that this can present an accessibility problem if you are playing with a blind friend.

If you’re new here and enjoyed this post, check out my previous posts where I talk about Pandemic, Secret Hitler, and Camel Up.