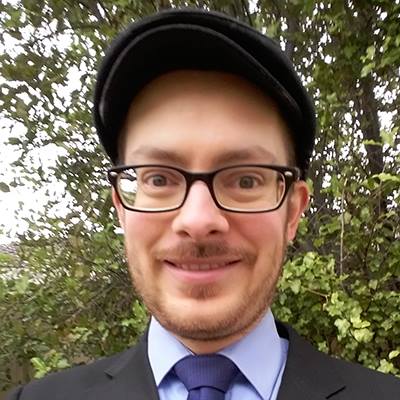 In Sheriff of Nottingham you can experience all the thrill and excitement of sneaking contraband past security, without any of the legal risk.

If you watch or listen to The Dice Tower on YouTube for any length of time you’re bound to hear reference to Sheriff of Nottingham. A simple bluffing game, it is easy to teach and play and provides plenty of laughs to boot.

Social deduction and bluffing games inherently lend themselves to the blind or vision impaired player. Such games still have some visual elements or mechanisms however that may be challenging for such players. Today I’ll be discussing how well Sheriff of Nottingham compares in this regard.

Note that my discussion will only cover the base game. There is an expansion for Sheriff of Nottingham available (Merry Men), but unfortunately I neither own nor have played it.

Image showing the game components of Sheriff of Nottingham

In Sheriff of Nottingham players are merchants bringing goods to market. The sheriff polices the import of goods, and may inspect the merchant’s bags for contraband. The game ends when every player has been the sheriff twice (three times in a three player game), at which point the goods in each player’s staff are counted up, along with a player’s wealth, and adding any bonuses. The most points wins the game.

Set up is very simple. First the deck of goods is prepared by removing excess cards (in the case of fewer than five players) and shuffling the goods cards together. Each player is dealt six cards face down. Two piles of five cards are then dealt face up. These two piles are both discard piles. The deck is placed beside them. Players will also receive a market board and goods bag in their colour, 40 money (Florins? Guilder? Either is good with me), and one player will be assigned the role of sheriff for the first round.

Each round players will discard and draw goods, then place up to five goods in their bag. They will declare the goods in their bag to the sheriff, who has the chance to inspect the contents once all players have declared. Finally the bags will be opened and goods placed in a player’s market – unless the sheriff inspects a player’s bag, in which case some goods may be confiscated and fines paid.

Starting with the player to the left of the sheriff, each player may discard up to five cards and draw up to five cards. Cards can be drawn from either the face down deck, or either of the two face up piles. When drawing from the discard piles, cards must be drawn in order.

There are three different types of goods.

Legal goods (green), which include apples, bread, cheese, and chicken

Image showing each of the legal goods

Contraband/illegal goods (red), which include crossbows, mead, pepper, and silk.

Image showing each of the contraband

Royal goods (yellow), which are special versions of the legal goods.

Image showing each of the royal goods

After discarding and drawing goods, players then place up to five cards in their bag and declare the contents to the sheriff. When declaring contents the player must be truthful about the number of cards inside. They may only declare one sort of good however and that good must be legal. For example, if I placed one cheese, two apples, and a crossbow in my bag, I might declare “four apples”.

The sheriff then has the opportunity to identify any player’s bag for inspection. To help the sheriff make this decision, players might pre-emptively bribe the sheriff not to open their bag, or to open that of another player, or both. The sheriff might also ask for a bribe to not look in a particular bag.

Bribes needn’t be money. Legal goods from a player’s market may also be offered, as well as favours such as a card from the bag, or promising not to inspect the current sheriff’s bag in the future. All promises that can be resolved in this round must be honoured. Those that apply to later rounds however need not be.

Once the sheriff has decided whose bags to inspect, if any, all bags are opened. Where a player’s bag was not inspected, they place legal goods face up in their market and contraband or royal goods face down at the top of their market.

If a player’s bag was inspected, then first all legal goods that were declared are placed in that player’s market face up. Next, any legal goods that weren’t declared are placed face up in the market, but the player must pay fine value of each of those cards to the sheriff. Finally, any contraband or royal goods are confiscated and placed face up in the discard piles in any order. Further, the player must pay the fine value of those cards to the sheriff.

If at any time a player lacks the funds to pay a fine, then they may pay with legal goods from their market instead. If they lack both funds and legal goods, then the fine is absolved.

With fines paid and all goods placed in markets the round ends and the sheriff passes one player to the left. If each player has been the sheriff twice, or three times in a two player game, then the game is over.

When the game ends, each player counts up the value of the goods on their market – legal, contraband, and royal. They also add the value of the coins they possess. Finally, bonus points are awarded for players with the most and second most of each legal good. The player who scores the most points wins.

There remains some interaction however with physical components. Players will need to determine what cards are in their hand, what cards are in the face up discard piles, and the point and fine values of cards. All of these things are, thankfully, very easy to make fully accessible.

For the player with vision impairment, identification and assessment of the game components comes down to two factors: contrast; and clarity.

Sheriff of Nottingham’s colour palette is not bad – and in this regard I disagree with Meeple Like Us’ assessment of the game’s components. The game does suffer from the usual issue with regard to player colours: black and blue, and blue and green can be hard to tell apart. It’s really only an issue with the merchant bags however and something that a sighted player can easily assist with. 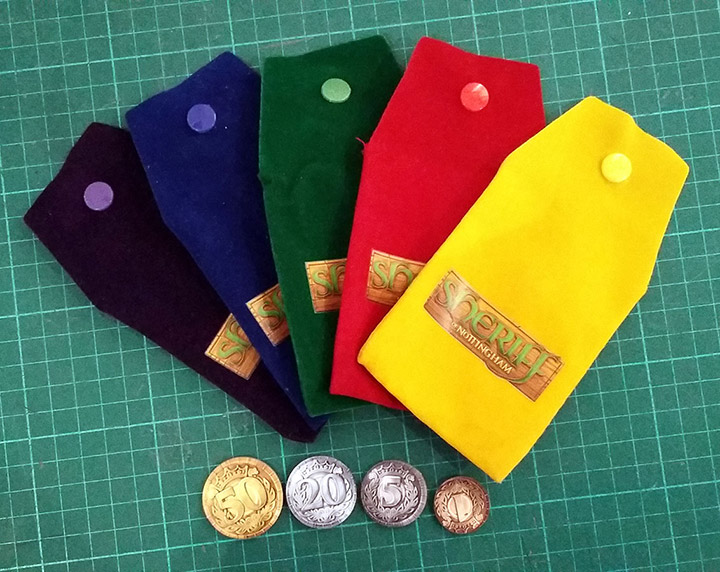 In fact, there’s no need to pass your bag to any other player. The sheriff can quite easily issue verbal inspection orders that are carried out by the player and verified by the other players.

For the most part the different images are distinguishable in good (direct) lighting, but in ordinary light. Bread and cheese in particular though are tough to tell apart, even in good lighting, without reading the card text. 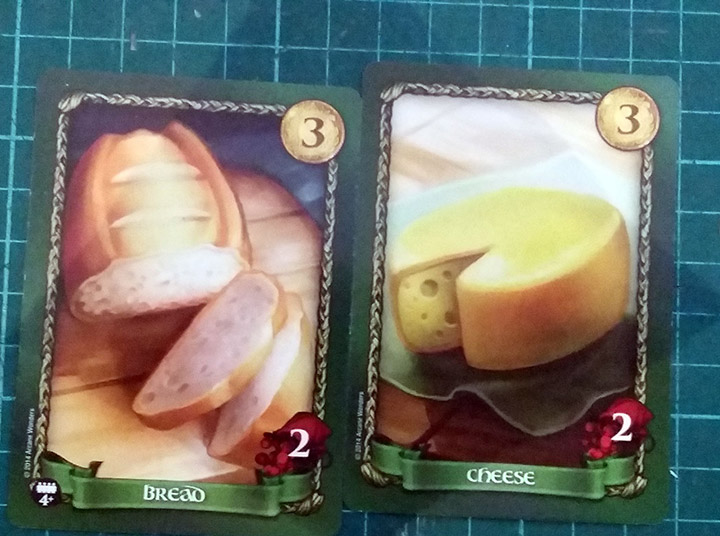 Card text is a bit mixed. Point values are larger, but black on grey backgrounds, which isn’t bad. Fines are smaller, but light on dark, which is good. Card names are the smallest text and white. For legal and contraband this is workable with magnification, but on royal goods it is unreadable because of their yellow banner.

Royal goods do have text at the top of the card reminding you which legal good they score bonus for. This text is dark on light, so its easier to read that than the card name to identify which good it is. 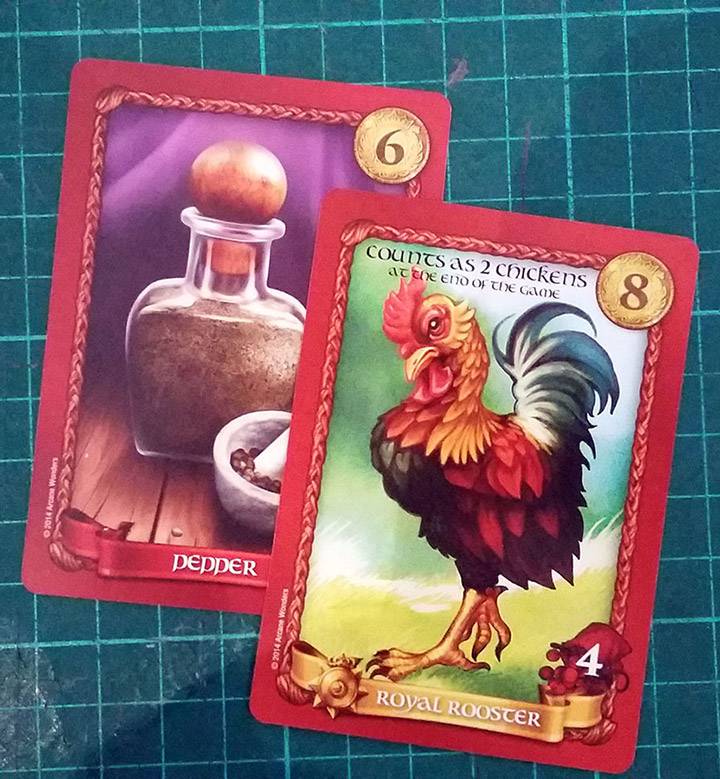 Overall, the card design isn’t bad. Good lighting and having magnification on hand should make the game accessible to players with moderate levels of vision impairment.

If you have a more significant level of vision impairment, or are blind, then you will need to mark the game’s cards.

Two tried and true methods that exist are to use tape or to braille label.

When using tape, the number and orientation of pieces could be used to identify the different types of goods. A reference chart of fine and points values could either be read out by sighted players on request, or be kept handy on a phone.

When using braille labels, you will be able to easily mark all of the relevant information on the card. Card names and values are simple, so there should be plenty of room to fit it all in.

There are a lot of cards to mark however, but given the simple nature of information on cards, it is nothing many hands won’t make light work of. Or, if you don’t mind spending the money, you can also pick up an accessibility kit for Sheriff of Nottingham from 64oz Games.

Sheriff of Nottingham is a riotous game. There’s always plenty of laughing and playful cursing when we play and you never quite know who is really ahead. It’s even possible to win by being completely honest, which is an amusing way to go about your business in game that revolves around deceit.

It is also a game that is highly accessible. Even for people with significant vision impairment or blindness, minor, simple card marking is all that is required to make the game completely accessible.

Easy to teach, quick to play, it’s a great, lighthearted, way to open or end a gaming session. I highly recommend getting a copy if you don’t own it already.