Sherlock Holmes: Consulting Detective is a story driven board game that puts you in the shoes of a crime investigator running around the streets of Victorian London with Sherlock in search of his nemesis, Professor Moriarty.

Welcome back to a new installment in the ‘Board Games You Can Play Blind’ series! Today we are taking a look at Sherlock Holmes: Consulting Detective, a board game focusing on narrative that was originally released almost 40 years ago, yet for many, it still manages to hold the top spot in the genre. Due to its popularity, the game has been reprinted a couple of times over the years, the latest one being the 2017 edition.

In this post I will give a brief overview of how the game is played and then explain why it is a perfect fit for visually impaired or blind players. There are no story spoilers in this post and the examples are all made up. 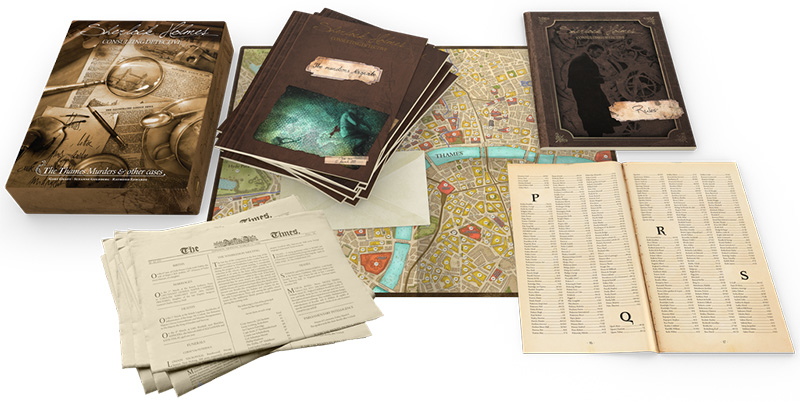 Sherlock Holmes: Consulting Detective has a total of 10 cases that can be played solo, cooperative as a group, or competitively. The thin rule book gives an explanation on how each variant is played, but personally I think it shines as a cooperative game. There isn’t an upper limit on how many players can play the game, and I have only played the game two player, but I don’t think increasing that number to four or five will take away from the experience.

If you hadn’t guessed yet, as a story driven game, Sherlock Holmes: Consulting Detective has a lot of well written text divided into multiple components. You have case files to introduce you to the crime; a clue book, where you discover clues when visiting a certain location or person; the London Directory accompanied by a map of London, which contains all the locations and people you can visit; and lastly newspapers that are published on the days of the crimes that give you additional clues to help with the deduction.

The rules of the game are quite simple. One of the players reads the introduction of the case aloud, describing the crime, where it happened, who was involved, and what evidence was found. One or more of the other players can take notes and then you can decide, as a group, which location or person you want to visit next.

During your adventures, you will get to examine evidence found at the crime scene, interview witnesses, check alibis, discover the mistresses of the London Elite, and much more. The map of London also has a scale that you can use to measure the time it takes to get from one location to the other. You can use this to check whether someone’s alibi has any merit. For example, Albert can claim that he was golfing 20 minutes after the murder occurred, but when you measure the distance between the Golf Club and the crime scene, you may discover that it only takes 10 minutes to get to the club. This will lead you to investigate Albert further.

Sometimes you will start following a bad lead and come up with wild theories as to what the current suspect’s motivations have been. Some of the people you talk to may give you false information as to what they were doing at a specific time because they are trying to hide the fact that they have some other scandalous secret unrelated to the crime. You should also pay special attention to the newspapers since they usually provide some highly important clues. Overall, a good tip to keep in mind is to focus on the facts rather than coming up with theories.

The rule book tells you that your goal is to beat Sherlock Holmes, and find the solution faster than him. By faster, I mean in fewer moves. Visiting a location or talking to a person counts as one move, so you should track all the locations visited which will be used at the end to find out how your score compares to Sherlock, who has a score of 100.

The game time can be quite variable as the players can decide whether they have enough information or keep walking the streets of London in search for more answers. When you decide you’ve solved the case, you can answer a questionnaire that gives you a certain amount of points if you answer correctly and read Sherlock’s solution to the case. Then, you use a formula to calculate your final points. Even though the game sets this goal of beating Sherlock, I recommend ignoring it as it’s practically impossible to solve the crimes in the handful of steps he does. You would also be missing out on the fantastic writing and interesting events when speaking to different people in the game. In each case you also can do a side quest that is in some way connected to the case, but is optional. These optional side quests can also give you some points at the end when you answer the questionnaire.

If you are a fan of murder mystery novels, whodunnit movies, or followed the Sherlock BBC show, you will have a blast with Sherlock Holmes: Consulting Detective. There is a lot of player interaction in this game, and you will constantly be bouncing ideas off of each other trying to solve the puzzle. You will experience many satisfying moments during each case, and even if you are completely wrong and start questioning your intelligence, you will still enjoy the actual solution when you realize how everything clicks.

OK, now that we’ve gone through how the game is played, let’s see why I’ve highlighted this one as a board game you can play blind.

Firstly, I must state that you will have a bit of a hard time if you want to play this game solo as a blind player. It certainly is not impossible, but it will require extra work to make the game accessible. Because I’m not into solo gaming and the most interesting thing about board games to me is the social interaction aspect, I did not bother making the game playable by a single blind person. However, that did not stop me from thinking about how this game can be made accessible.

So, if you want to keep this great experience all to yourself (which I really do not recommend), what you could do is use OCR (optical character recognition) tools to make a computer or smartphone read the text for you. To do this, you would need to scan every single page and that is going to take a long while as there is plenty of material. Even after you do that, navigating the clue book may be quite tedious. Let me restate that I have not done this and it is just an idea on how I would attempt to do it if I wanted to play it alone.

But what makes this game fun is the player interaction that comes from cooperative, or cooperative-competitive play. About 20% of the game time involves reading the clues in the clue book and taking notes at every location that you visit, the other 80% of the game will be spent discussing with other players and trying to get to the bottom of the case. This game is a great mental exercise, so all you would need to fully enjoy it is a single sighted player to read the case description, clues, and newspapers.

If you still feel like you are useless for the 20% of the game as a blind player, you can grab your laptop or phone and take notes for the group. You will usually need to write down names of persons of interest, locations, findings at the crime scene, and other details you think might be pertinent.

Sherlock Holmes: Consulting Detective is one of few games that can be played while pacing your living room (and potentially getting grumpy comments from your fellow players that you are making their head spin), or laying down on the sofa and trying to make sense of the contents you’ve discovered in an envelope. Moreover, this is a great game to play remotely via Skype or Google Hangouts.

As a blind player, I like to think of this game as an audio book where you can interact with the narrator and decide together on where you will go next. The high quality writing makes the experience even better.

The nature of these types of story driven games do not allow me to go into too much detail when talking about them because they are a ‘one time experience’. Once you solve a mystery, there is not much point of replaying it, though you can still go through the clue book for the case to see the dozens of clues you have skipped. If you spend about two hours per case, that will give you a total of 20 hours of high quality game time, and that is well worth the retail price. If you enjoyed the game and want more, you can purchase expansions which add new cases. You can also find fan made cases on Board Game Geek for free.

Blind and visually impaired players can fully participate in such games because they do not need to rely on their eyes at all. You don’t need to fumble with cards or dice. All you need to enjoy this game are some snacks, a cup of tea and a sighted player to read the story.

I hope this article piqued your curiosity to check out Sherlock Holmes: Consulting Detective.